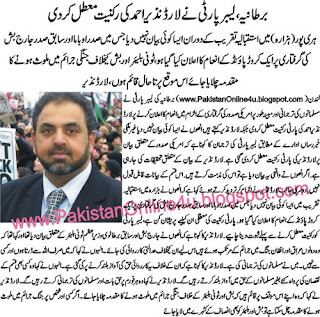 Lord Ahmed, 53, who in 1998 became the first Muslim life peer, was reported to have made the comments at a conference in Haripur in Pakistan.
A Labour Party spokesman said: “We have suspended Lord Ahmed pending investigation. If these comments are accurate we utterly condemn these remarks which are totally unacceptable.”

According to Pakistan’s Express Tribune newspaper Lord Ahmed offered the bounty in response to a US action a week ago.

The US issued a $10 million reward for the capture of Pakistani militant leader Hafiz Mohammad Saeed, founder of the Lashkar-e-Taiba group, who it suspects of orchestrating the 2008 Mumbai attacks in which 166 people died as terrorists stormed hotels and a train station.

The British peer reportedly said: “‘If the US can announce a reward of $10 million for the (capture) of Hafiz Saeed, I can announce a bounty of £10 million (for the capture of) President Obama and his predecessor, George Bush.”
Lord Ahmed reportedly said he would arrange the bounty at any cost, even if he had to sell his own personal assets including his house.

He was said to have made the comments at a reception arranged in his honour by the business community of Haripur on Friday.

A former Pakistani foreign minister and a provincial education minister were said to have been present at the reception.
Lord Ahmed, who was born in Pakistan, became Baron Ahmed of Rotherham at the age of 40. In 2007 he was highly critical of the awarding of a knighthood to Salman Rushdie, claiming the author had “blood on his hands.”

In 2009 he was jailed for dangerous driving after sending and receiving text messages minutes before being involved in a fatal motorway crash. The Court of Appeal later suspended his 12-week jail sentence.

A week ago the US offered the bounty on Saeed in response to what it called his increasingly “brazen” conduct in Pakistan where he moves freely and appears on television.

Documents found by US special forces at Osama bin Laden’s final hideaway in Abbottabad, 22 miles north of Haripur, last year apparently linked Saeed with the al-Qaeda leader. The evidence was said to have shown that bin Laden played a key role in planning the 2008 Mumbai attacks.

In its statement suspending Lord Ahmed the Labour Party said: “The international community is rightly doing all in its power to seek justice for the victims of the Mumbai bombings and halt terrorism.”

Lord Ahmed firmly denied offering a bounty, but said he had told the meeting that Mr Bush and former-Labour prime minister Tony Blair should be prosecuted for war crimes.

Speaking from Pakistan to the Press Association he challenged the Labour Party to provide evidence for the suspension.
He said: “They have suspended me? That’s a surprise to me. I did not know.

“I never said those words. I did not offer a bounty. I said that there have been war crimes committed in Iraq and Afghanistan and those people who have got strong allegations against them – George W Bush and Tony Blair – have been involved in illegal wars and should be brought to justice.

London: The British Labor Party has suspended the membership of its party member and a British parliamentarian of Kashmiri origin, Lord Nazir Ahmed, here on Sunday.

In a statement issued, the spokesman of the party said that if these comments were accurate the party utterly condemns these remarks which are totally unacceptable.

“The international community is rightly doing all in its power to seek justice for the victims of the Mumbai bombings and halt terrorism.”

“His membership was suspended due to the statement regarding US Presidents Barack Obama and George W. Bush,” the statement added.

The spokesman further said that a probe regarding the statement would be carried out by the party.

On the other hand Nazir disown the allegations against him and said that he never announced a bounty on Barack Obama and George Bush.

Talking to media Nazir said that he did not announced any bounty on US Presidents instead he demanded for an action against George Bush and British PM Tony Blair for killing innocent people in Iraq.

Pakistan born Lord Ahmed was made Britain’s first muslim peer in 1998 and is no stranger to controversy. In 2007 he criticised Tony Blair’s decision to award author Salmond Rushdie a Knighthood, saying he had “blood on his hands”.


Biography of Lord Nazir Ahmad – Life Story
It is to be mentioned that British parliamentarian of Kashmiri origin, Lord Nazir Ahmed, has announced a bounty of 10 million pounds for the capture of U.S. President Barack Obama and former President George W. Bush.
Tweet