Home » About Hazara » Peoples of Hazara had seen, Tsaunami, Earthquakes and Floods now they will bring Islamic Revolution, Munawar Hassan 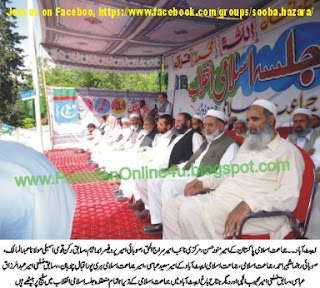 JI Amir says Gillani should be chanined, put behind bars after conviction from SC, urges people to vote for pious people

Abottabad, May 08: Amir Jamat-e-Islami (JI) Pakistan Syed Munawar Hasan has said that Yousuf Raza Gillani is no more the Prime Minister of Pakistan after being found convicted of contempt of court by the Supreme Court of Pakistan.
"Gillani is a proven convict and illegallay excercizing the powers  of of the office of Prime Minister. Istead of holding PM office, he should be chained and put behind bars at least for five years" JI Amir told a large public gathering in Jinnah Bagh Abbottabad on Tuesday.
Hundreds of people including JI supporters, common people and local youth carrying JI flag attended the public gathering and chanted slogans for change in country’s political arena.
Syed Munawar Hasan bitterly criticized rulling coalition including Pakistan People’s Party (PPP), Awami National Party (ANP), Muttahida Qaumi Movement (MQM) and PML-Q and termed thema group of thugs, plundering national wealth.
He also criticized Pakistan Muslim League-Nawaz (PML-N) and said people of Pakistan no more trust Nawaz Sharif as he supported the present coruppt government on a number of occassions in last four years and now nobody was willing to support his "Go Gillani Go" movement.
"I want to tell you Mr. Sharif that you have lost the trust of people and the political parties. I also want to remind you that you solo flight against the present governemnt cannot succeed due to trust deficit and you ambigious policies in the recent policies" he added.
JI Amir claimed that people vote for people like Zardari and Sharif in the elections and then curse them for entire their five years’ tenure and urged them to vote for Jamat-e-Islami so that they could get justice, economic prosperity and a corruption free Pakistan.
Commenting on desire of locals to have a separate Hazara province, he said without electing ‘pious people’ people of Hazara could not suceed in achieving their target of having their own province.
"These PPP and PML-N people have no respect for your wishes and desires. All they care for is money which they aim to plunder after electing to power" he claimed.
Commeting on killing of Osama bin Laden who was assassinated by US Navy SEALs in May last year in Abbottabad, he said Abbottabad is now known for Osama but not a single person in this city or elsewhere in the country is sure if Osama was really killed.
"No evidence of Osama’s death, any video or photograph to corroborate have been presented by the Americans but I want to make one thing clear that despite his reported killing, Osama is still alive in the hearts and minds of people as he was a symbol of struggle against oppression and US hegemonic designs" he maintained.
Syed Munawar Hasan also alleged that present government was following Pervez Musharraf’s policy of ignoring Kashmir issue and initiating so-called peace process with India but declared that without ending Indian oppression in the Indian held Kashmir, peace with India could never be even think of.

Another central JI leader Sirajul Haq in his address called for a referrendum in the Hazara division on the issue of Hazara province and said JI whole-heartedly support the demand for Hazara province by the lcoals.
He claimed that according to Transprency International, 4000 billion rupees were plundered by the ruling colation during last four years, which if utilized properly, could have transformed Pakistan into a modern, welfare state.
JI leader calimed that according to some reports, some 97 billion US dollars of Pakistan politicians were deposited in the Swiss banks and vowed to bring all this money back to Pakistan and spend it on welfare of people if JI is voted to power in the coming elections.
MR. Sirajul Haq assured the people that if JI is voted to power, it would Islamic system of justice in the country and country’s Chief Justice would be made bound to decide matters as per Quranic injunctions instead of British law.
Prof. Ibrahim Khan, the Naib Amir of Jamat-e-Islami also supported the demand for Hazara province and urged the people to vote for pious, honest people so that they could live healthy, quality life in the country.
He claiemd that only Jamat-e-Islami could bring down inflation, create jobs and transform Pakistan into modern Islamic state as it was a political force that believes in honesty and serving masses without any discrimination.
On the occasion, a resolution demanding creation of a separate province based on all the areas of Hazara division was adopted overwhelmingly by the participants of the public gathering.
Other local leaders of the Abbottabad and adjoing districts of Khyber Pakhtunkhwa also spoke on the occasion.