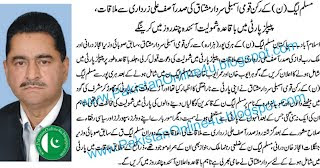 The PML-N member has some reservation with his party on an unknown issue.

Sardar Mushtaq said that he was thankful of President Zardari that he gave time to him. He said that there is no need of party’s approval to serve up the people.