Taxila : Nation will have to stand up against Zardari group, Nawaz Sharif

Taxila : Nation will have to stand up against Zardari group, Nawaz Sharif 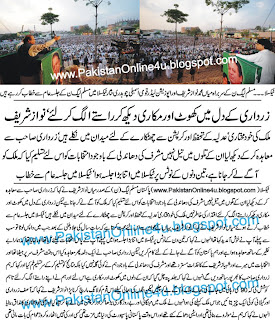 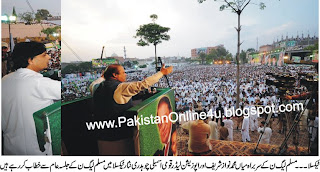 TAXILA: Pakistan Muslim League-Nawaz (PML-N) leader Mian Nawaz Sharif has said that the rulers are too stubborn to accept logic they only understand the language of “boot”, Geo News reported.
He was addressing a large public gathering in Taxila - the very first rally of PML-N held as part of its 'Go Gilani Go' campaign.
Nawaz lauded the residents of Taxila for turning up at the rally to make it successful and that too at such a short notice of just three-days.
Giving a broadside to President Asif Ali Zardari he said Pakistan Peoples Party's (PPP) co-chairman breached the Charter of Democracy (CoD), which he (Nawaz) had cosigned with the late Mohtarma Shaheed Benazir Bhutto.
“He was not sincere in implementing the CoD, that’s why we parted ways with the PPP”, he said.
He did not stop there and went ahead to add that PPP was devious in its dealings, thus it could not be trusted anymore.
“The rulers even backtracked on the restoration of judiciary, only we made it possible with our long march”
Going forward he said that PML-N would not let anyone trample the constitution of Pakistan.
On the Swiss bank accounts, he said, he will not rest till the repatriation of plundered $60 million back to Pakistan.
Nawaz said if he could lock horns with a Super Power then Zardaris stood nowhere.
No one was serious in bringing about peace in Karachi, he added.
He said that former dictator Gen (Retd) Pervez Musharraf had his nomination papers rejected, which was tantamount to rigging of elections, but even then PML-N embraced the results.
He further said that none other than the rulers were responsible for the devastation Pakistan was going through.
Glorifying his past deeds he said that as the prime minister of Pakistan he never bowed down before the Superpower.
“Masses topped all of our priorities whenever we held talks with America”, Nawaz said
A supercharged Nawaz invited the masses to join ranks with PML-N in their war against the corrupt rulers.
“Nation will have to stand up against this group of graft and wage a war on it until it was destroyed.”
In his concluding remarks he said that Pakistan was an endangered country facing myriad threats from all sides and his coming to Taxila was a part of his efforts to save the country with the help of people.
“Prepare for the long march,” he said before leaving the podium.
Tweet