Home » About Hazara , Top Stories » Kohistan : Commissioner and DIG Police Hazara visited Gadar, no solid clue found about the 5 women which were shown in video

Kohistan : Commissioner and DIG Police Hazara visited Gadar, no solid clue found about the 5 women which were shown in video

Complete Story - Kohistan : Commissioner and DIG Police Hazara visited Gadar, no solid clue found about the 5 women which were shown in video
While 2 accused who booked for video scandal present them to Battagram Police, which later on shifted to Kamela-Kohistan 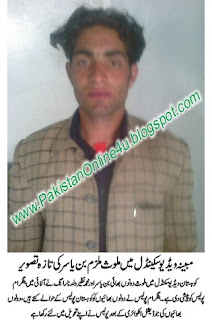 KOHISTAN: Five women in Kohistan, four of whom were filmed ‘singing and dancing’ with men at a wedding party, were killed on May 30 after a tribal jirga ordered their execution, claimed Muhammad Afzal – brother of the two accused of filming the video and uploading it on the internet. Officials have however denied this claim.
Commissioner Hazara Khalid Umarzai and Provincial Minister for Social Welfare Sitara Ayaz denied that the women were killed and said they were alive and safe at their homes. Police officials in the area also denied the incident.
The fifth girl, sister of one of the women filmed, was also killed on suspicion, claimed Afzal.
Police had filed an FIR against the two brothers, Bin Yasir and Gul Nazar, for filming these four women and putting the video online.
According to Afzal, the women were kept in captivity for a month and were tortured by pouring boiling water on their bodies before they were killed.
The jirga had also ordered the execution of the two brothers along with the four women. However, the men had fled the area.
It was earlier reported that the accused, in connivance with four other people including their elder brother and a cousin uploaded the video on the internet and also released it to some media outlets. This caused uproar in the community, which felt the video had stained the honour of the tribe’s women.
Tweet