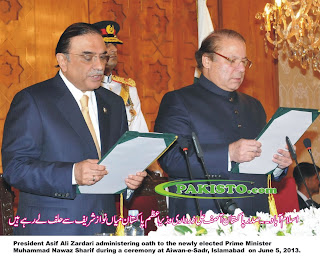 ISLAMABAD: In an unprecedented development in Pakistan’s parliamentary history, Pakistan Muslim League-Nawaz (PML-N) President, Nawaz Sharif was sworn in to become not only the 27th Prime Minister of Pakistan but also the first ever Pakistani politician to assume the office of the country’s chief executive for the third time.
President Asif Ali Zardari administered the oath of the PM's office to Nawaz Sharif at an impressive ceremony here at President's House.
Earlier, Nawaz Sharif secured 244 votes with his rivals Makhdoom Amin Fahim (PPP) and Javed Hashmi (PTI) bagging 42 and 31 votes respectively.
Former prime ministers Yousuf Raza Gilani and Raja Pervaiz Ashraf were among several dignitaries who attended the oath taking ceremony. Chief of Army Staff General Kayani and the three services chiefs were also in attendance.
Nawaz makes a new record
Nawaz Sharif has become the first person to be elected to the office of prime minister for a third time. Previously a restriction was in place that barred any candidate from holding public office for more than two terms.
The last time Nawaz Sharif was in office was 13 years, 7 months and 21 days ago. His government back then was toppled in a bloodless coup led by the Army Chief at the time, General Pervez Musharraf on 12th October 1999.
Nawaz Sharif began his political career in 1981 when he became Punjab Finance Minister, in 1985 he became Chief Minister of the province and in 1990 he was elected as prime minister for the first time.
His first government was dismissed by then President Ghullam Ishaq Khan. The Supreme Court did however reinstate Sharif’s government but pressure from the Army Chief in 1993, forced Prime Minister Nawaz Sharif to tender his resignation.
He was elected Prime Minister for a second time in 1997 securing a heavy mandate. However due to his differences with General Jehangir Karamat, Nawaz Sharif promoted a junior officer to the post of Chief of Army Staff, and in October of 1999, that same Chief of Army Staff toppled the Sharif government, sending Nawaz Sharif first to Jail and then into exile.
Jail & Exile
After his dismissal in 1999, Nawaz Sharif was imprisoned first in Rawalpindi then shifted to Landhi Jail in Karachi, and then to the Attock Fort. He had been sentenced to life imprisonment as well as a 14 year sentence.
After mediation from rulers of friendly states, Nawaz Sharif and his family left Pakistan on the 10th of September 2000 for Saudi Arabia.
Return to Pakistan & Politics
During his years spent in exile, Nawaz Sharif met with Benazir Bhutto in London, where they signed the Charter of Democracy, which united the two largest political parties of the country against the Military dictator Pervez Musharraf.
Nawaz Sharif returned to Pakistan on the 25th of November 2007, where his party became part of the hung parliament following the 2008 elections, forcing the President General Pervez Musharraf to resign from office in the face of impeachment proceedings.
Nawaz Sharif’s party left the PPP led government after the PML-N developed differences over the restoration of the Judges. During the same time President Zardari enforced Governor rule in the province. Nawaz Sharif then led the successful Long March responsible for the restoration of the Judiciary.
The Opposition
After parting ways with the PPP led government and the restoration of the Judiciary, the PML-N played its role as the opposition party in parliament. A role the PML-N fulfilled constructively till the 2013 elections.
Elections 2013
When Nawaz Sharif had assumed the office of the Prime Minister in 1997, Pakistan faced problems, but not as serious in nature as the country faces today. His party secured more votes than analysts had expected achieving a simple majority in the house along with its allies. (GEO NEWS)
Tweet