Why Putin Divorced: Russian President And Wife Lyudmila seperated after 30 years
Russian President Vladimir Putin is the former head of the feared KGB. He has been blamed for the mafia state that has infested Russia since the dissolution of the former Soviet Union. He has presided over the selective punishment of political opponents such as oil tycoon Mikhail Khodorkovsky, the band Pussy Riot and a bunch of protestors labeled rioters for participating in a rally a year ago. He's cracked down on nongovernmental organizations, forcing them to register as foreign agents even when they are merely trying to make the lives of struggling Russians better. He's backing a ban on gay couples' adoption of Russian children and his allies are supporting a measure that goes homophobically further, banning homosexual "propaganda." And now it appears even more clear that he purloined the Super Bowl ring of New England Patriots owner Robert Kraft. 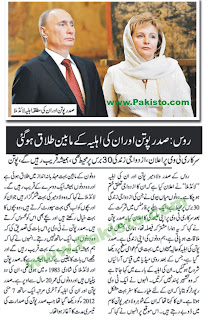