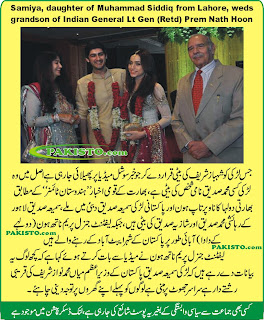 Cross-border bonhomie couldn’t get more pronounced. In Panchkula on Friday, Kanav Pratap Hoon, the grandson of Siachen hero Lt Gen Prem Nath Hoon (retd), tied the knot with Samiya Siddiq of Lahore, Pakistan, in a court marriage.
Kanav, 27, and Samiya, 26, had met in Dubai for the first time and fell in love. Samiya is the daughter of Shazia Siddiq and Mian Muhammad Siddiq while the Hoons are natives of Abottabad in Pakistan. Kanav helps in his family’s business of Hyundai dealership at Chandigarh’s Industrial Area.
At the lunch organised on Friday at Taj Chandigarh, Sector 17, for close friends and relatives of the bride and groom, many guests from Pakistan were also in attendance. Prominent local politicians included Punjab MLAs Kewal Singh Dhillon, Rana Gurmit Singh Sodhi and Rana Gurjit Singh.
Though the bride and groom refused to talk to the media, Lt Gen Hoon came forth to clear the rumour that the girl belongs to Pakistan Prime Minister Nawaz Sharif’s family. “It is a lie. People should do their homework (before making such statements),” he said.
On getting a Pakistani bride for his grandson, Lt Gen Hoon remarked, “It is a good development that relations are being tied across the border,” and added, “People across the border should meet often. Pakistan Prime Minister Nawaz Sharif should talk to our prime minister.
Recently, they had talked about a demographic change being introduced in Rajouri [a district in Jammu].” Hoon said “whosoever is living in India is an Indian,” and that “giving respect and talking are two different things.”

The former commander of Indian Army’s Western Command, Lt Gen Hoon was heading 15 Corps regiment when India took over the highest battlefield in the world, Siachen. Operation Meghdoot was the codename of the military exercise undertaken to capture Siachen and launched on April 13, 1984.


Till today, Pakistan lays claim on the glacier.
Tweet